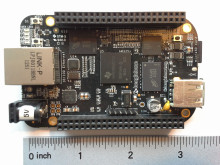 The BeagleBone is like a combination between a microcontroller (like Arduino) and a small Linux desktop. It is most similar to a Raspberry Pi, but with more pinouts and a faster processor. The BeagleBone has several variants, the most recent edition being the BeagleBone Black (aka BBB), which retails for $45 USD.

It is a great choice if you are going to add image or video processing to your robot. An Arduino is nowhere near powerful enough to handle images. Arduino, however, is extremely easy to use and extremely well documented with a massive community. 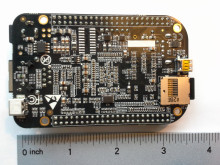 Against a Raspberry Pi, it's a harder choice to make. It's more expensive, but has a processor that's faster and capable of running ARMv7 operating systems like Ubuntu and Android, where a Raspberry Pi is substantially more limited. A Raspberry Pi is easier to use and has a much larger community behind it, but the BeagleBone has some powerful hardware features. If you are undecided, the good news is that they are both really cheap, both run Python, and have very similar ways of accessing GPIO (the /sys/ directory), so really you could change your mind midway through a project and not face too much of a setback.