A mobile robot shouldn't be hindered by power cables and data connections. So, when making a mobile robot, it is often necessary to communicate with it wirelessly.

Many forms of wireless communication are still, essentially, serial. So, converting a project from being tethered by a USB to being completely wireless is simply a matter of getting a good battery, and the right wireless accessories (you'll need two ends).

This tutorial will go through the configuration of Series 1 XBees.

The figure below shows what a typical XBee looks like.

Before getting XBees to communicate with each other, it may be necessary to configure. This tells the XBees which channel they will send or receive data from and which XBee they are communicating with. Configuring can be done easily with the use of a software called X-CTU . The X-CTU program can be found under Diagnostics, Utilities and MIBs .

There are two different boards that can be used for configuration. The XBee Explorer USB board is available through  Sparkfun .  The  SainSmart XBee Shield module , as seen below, can also be used to configure XBees with the use of an Arduino.

Note: If the XBee Shield module is being used, put your Arduino in reset, which means run a wire from reset to ground as seen below, and make sure the jumpers on the shield are set to USB. Put the shield on the Arduino.

Plug either the Arduino and shield or the Explorer board into the computer and then start the X-CTU program. The program should be able to open up and display a screen similar to the one below.

Notice how it recognized the product being used. It should be noted that this is the PC Settings tab. In this tab, there should be a Test/Query button on the right. An example of the screen print out can be seen below. 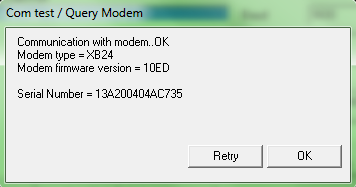 From this screen, the Serial Number High (SH) and Serial Number Low (SL) can be found for the Arduino. This can be done by breaking apart the Serial Number. Each SH and SL can be eight hexadecimal digits long; however, the SL will be eight long and the SH can be shorter. For example, the above figure shows a SH of 13A200 and a SL of 404AC735.

Go to the Modem Conguration tab and select the Download new versions button. Wait for the download to finish and then select the Read button. This will read some of the data in the XBee, as seen below. If the XBee has not been configured before, it will not read the SH or SL from it, so that information must be obtained from the Test/Query screen. Repeat these steps with the other XBee and make sure to know which SL and SH belong to each XBee. 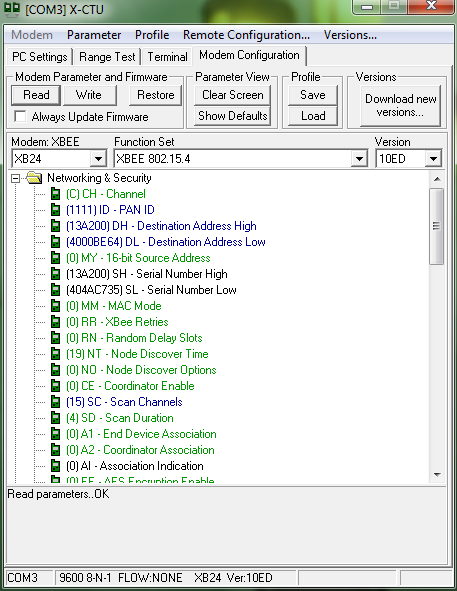 The following figure gives a graphical representation of this. 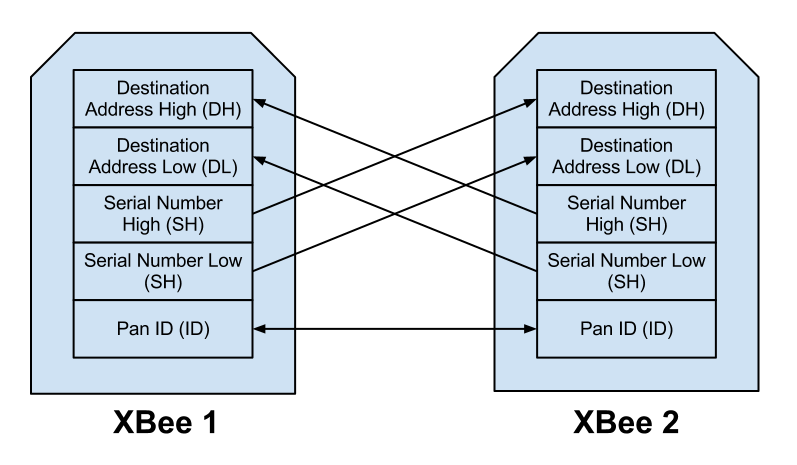 The two XBees should now be configured to communicate with each other. This means that coding to connect the two may now be done and the wireless communication is ready to go.

XBees cannot both send and receive data at the same time. If caution it taken, data should not be lost due to this fact.

Coding with XBees is simple because they can simply be coded using the familiar serial code.

To send from an XBee:

To receive from an XBee:

The above code for sending and receiving data from an XBee is valid for the code on the Arduino.

If an Arduino with a shield is used to connect to the computer, the code put on that Arduino is a simple blank sketch: